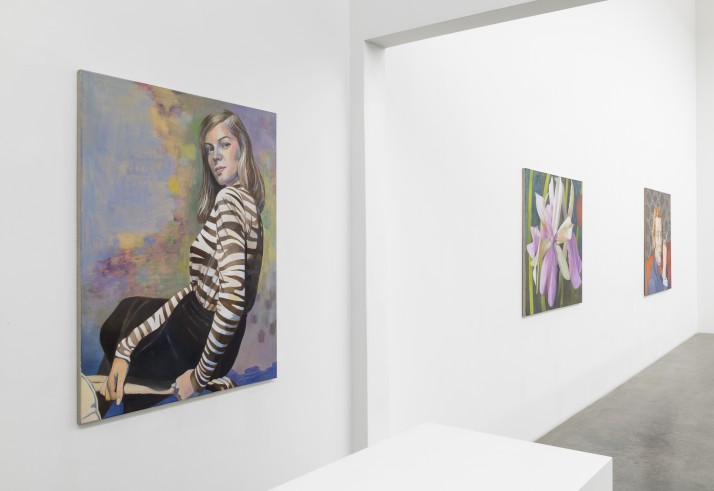 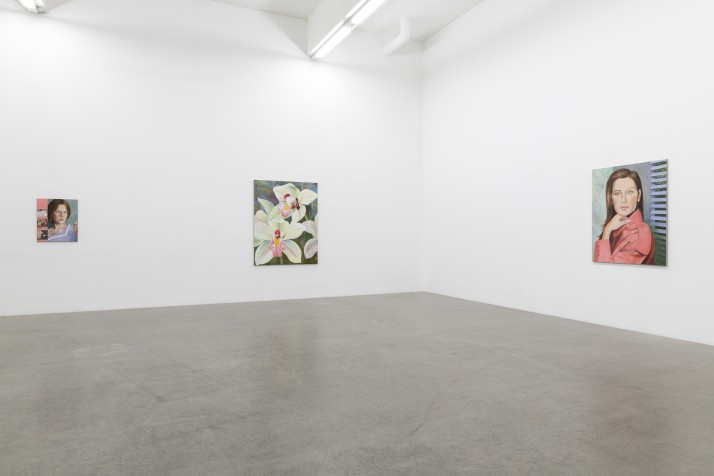 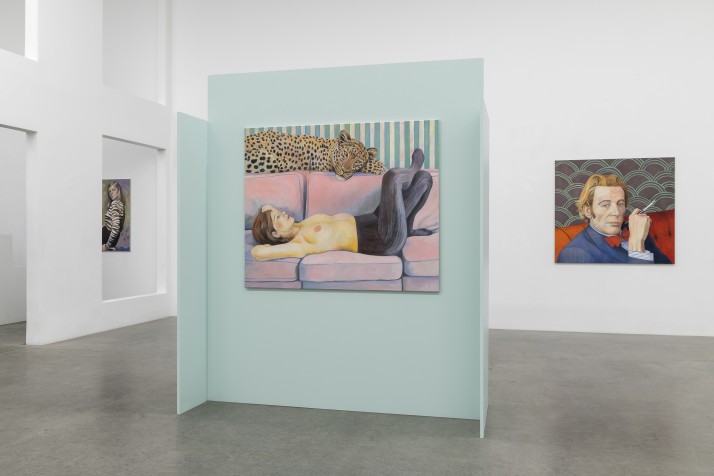 In the context of social debates, ‘soft power’ is usually brought up as an alternative to the hard means of political power. In contrast to the police and military forces, diplomacy is a soft power. But consumption and culture, museums or language schools are institutions of soft power, too. In fact, artists are ‘warriors of soft power’ – an idea that evokes ambivalent feelings.

Every period has its names. Three of the works presented in the exhibition trace back to covers of the magazine Emma, each of which, as it were, indicates the state of the ‘Federal German feminism’ of its time. “C.B.” is based on the earliest cover of 1985, featuring Claire Bretécher, a French satirical cartoonist. The latest cover was published in 2015 and shows a lesbian couple: “Elles”. Somewhere in between lies “Kid Woolf”: Nicole Kidman playing Virginia Woolf in “The Hours”. Together these works span a period of four decades. The signet, which is the female gender symbol, the name of the magazine, and the headlines have all been manipulated; they are either covered by monochrome colour fields or vanished completely. The Emma archive serves as the source of this series; through the digital availability of all issues from 1977 to today, the cover images are linked with the innumerable images of actresses and actors, dating sites, and film stills circulating on the internet, which provide the basis for the personages and subjects of many of the paintings in this exhibition: While in many of her earlier works, Birgit Megerle either portrayed people from her own environment or staged the motifs by herself, the moment of production is now strongly focused on the process of painting itself. The paintings’ source materials and what might have initially sparked Megerle’s interest (in a motif) remains unknown to the observers. Through the painting process, Birgit Megerle transforms her material to a point where it is no longer clearly discernible what had previously been sharp or intensely present. It seems as if the rendering in slow motion softened the contours without actually blurring the lines. The specific motifs have turned into an analogy for soft power within the process of painterly appropriation; one physiognomy has morphed into another.

However, such soft forms may also be understood as something more solid in the context of the exhibition. Make-up would be one example. Claire Bretécher’s smokey eyes or a precisely applied black eyeliner are forms that have become a consolidated look that can be put on like a shield. Slider turtles, whose shells are designed according to their habitat, renew their carapaces regularly, though undoubtedly not at a particulary rapid pace. Presumably, painting the make-up shields also takes a long enough time to move slowly enough through the different forms of feminisms that have developed since the 1970s, and at the same time align one’s own image in and with the mirror of the other figures. Birgit Megerle’s portraits would thus confront the pressure imposed on us by some ideas and ideals of beauty with a form of artificiality and masquerade that serves both as strategy and information.

Today, shifts of consciousness are mainly communicated through a visual imagery that has evolved from the use of social media. Photographic self-representation and its respective logic of reception have become indicators of emancipation movements. The pace is quite different from that of painting, but the issues that arise from the self-portrayals remain the same. Jungleworld is a piece refering to a painting by Manet, whose work is well known to be a popular example for the investigation of the ways social practice settles down into painting. The subtle non-verbal proximity-distance negotiation against the backdrop of a lushly sprawling greenhouse, as seen in In the Conservatory (Dans la serre, 1879, Alte Nationalgalerie Berlin), turns into a rather unrealistic setting in Birgit Megerle’s work. The reclining figure on the couch consciously exposes herself to the viewer’s gaze, but leaves the head-on confrontation to a jaguar sharing the sofa with her, elegantly looking past us.