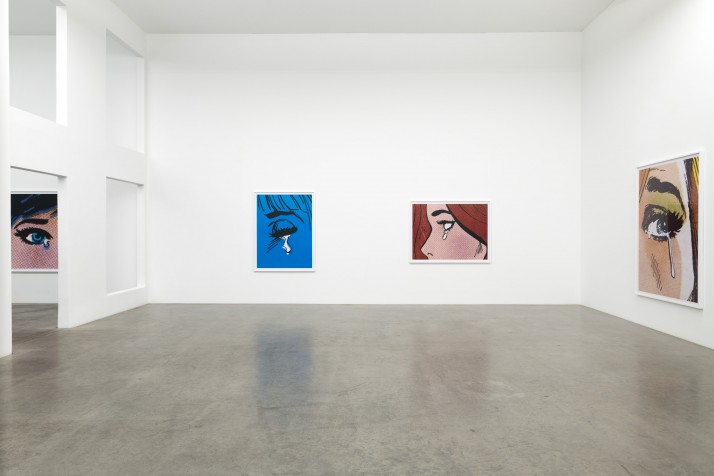 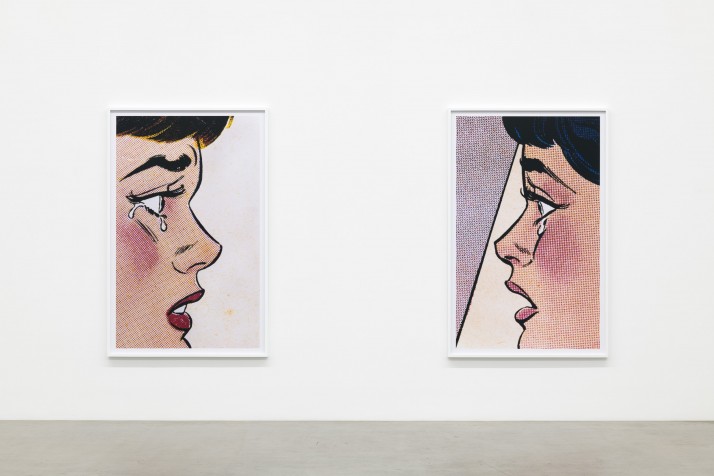 Galerie Neu is pleased to announce an exhibition of new work by the New York- based artist Anne Collier. This will be Collier’s second solo exhibition with the gallery.

Collier’s exhibition focuses on her ongoing series ‘Woman Crying (Comic)’ and ‘Tear (Comic)’: each based on imagery sourced from American romance comic books published between the 1950s and the 1980s. Exclusively marketed to an adolescent female readership, the comic books’ clichéd narratives paradoxically served to reinforce the notion of a subservient and eternally suffering female subject. Self-consciously acknowledging the early work of Roy Lichtenstein and the subsequent revisions of Lichtenstein’s iconography by both Richard Hamilton and Sturtevant as departure points, Collier’s ‘Woman Crying (Comic)’ and ‘Tear (Comic)’ consist of greatly enlarged and isolated images of women’s tear-filled eyes and graphic depictions of individual tears.

“Woman Crying (Comic) and Tear (Comic) consist of photographic details of their ostensible subjects drawn from romance comics of an earlier era, that of four-color process printing and Ben-Day dots. With these works we are in the realm of the extreme close-up ... A crying woman is reduced to an eye shedding a tear, shorn of any narrative reference; tears themselves appear as abstract blobs, pale biomorphic shapes that drip down a flesh-colored field. Weeping eyes may be open or closed, seen in profile or straight-on; their sobs are sometimes copious, sometimes elegantly economical. ... At this level of enlargement, we become engrossed by the details of the printing process itself, with its separation and overlay of cyan, magenta, and yellow dots, and its inky black that sits on top of these colors, defining contours and the dense thickets of eyelashes and brows. We even glimpse the grain of the cheap paper on which these panels were printed, losing ourselves between the heightened emotional state depicted, its stylized representation, and the mechanical means by which it has been reproduced. Perhaps it is time, however, that we also saw it as one in which a given technological mode of reproduction – here, the four-color printing process of the comic – encounters another, the chromogenic print of Collier’s photograph. Here two material forms of reproduction collide, and one is reminded of the curious sympathy that exists between them, something suggested in a passage from Don DeLillo’s Underworld, when he remarks that “a photograph is a universe of dots. The grain, the halide, the little silver things clumped in the emulsion. Once you get inside a dot, you gain access to hidden information, you slide inside the smallest event.”

Collier pursues her own version of this dot theory in her new works, but crucially she also recognizes that this is not only a matter of the conjunction of two disparate visual technologies; it is also that of two regimes of image replication and dissemination, whose distinct class bases must be distinguished – the technology of mass reproduction found in comic books and the limited edition, archival print found in the realm of photography as a fine art – even as they both find themselves rendered increasingly obsolete in an era of digital printing. ... In her new series, Collier engages in a strategy of ambiguity and decoy in order to preserve the inexhaustibility of the image. The tear becomes less a trap for femininity than a means of escape, a slippery enigma through which she deflects photography’s conscription into any solitary or static signification.”